Attention client/members affected by severe weather:
If you have storm damage to report and need assistance, our Claims Team will help make it safe and easy.

Please note, inspections may be delayed due to the cold weather.

Debt poses a growing threat to the financial security of many Americans — and not just college graduates with exorbitant student loans. Recent studies by the Center for Retirement Research at Boston College (CRR) and the Employee Benefit Research Institute (EBRI) reveal an alarming trend: The percentage of older Americans with debt is at its highest level in almost 30 years, and the amount and types of debt are on the rise.

In the 20-year period from 1998 to 2019, debt increased steadily for families with household heads age 55 and older; in recent years, however, the increase has largely been driven by families with household heads age 75 and older. From 2010 to 2019, the percentage of this older group who carried debt rose from 38.5% to 51.4%, the highest level since 1992. By contrast, the percentage of younger age groups carrying debt either rose slightly or held steady during that period.

Mortgages comprise the largest proportion of debt carried by older Americans, representing  80% of the total burden. According to EBRI, the median housing debt held by those age 75 and older jumped from $61,000 in 2010 to $82,000 in 2019. The CRR study reported that baby boomers tend to have bigger debt loads than older generations, largely because of pricey home purchases financed by small down payments. Consequently, economic factors that affect the housing market — such as changes in interest rates, home prices, and tax changes related to mortgages — may have a significant impact on the financial situations of both current and future retirees. Credit-card debt is the largest form of non-housing debt among older Americans. In 2019, the incidence of those age 75 and older reporting credit-card debt reached 28%, its highest level ever. The median amount owed rose from $2,100 in 2010 to 2,700 in 2019. 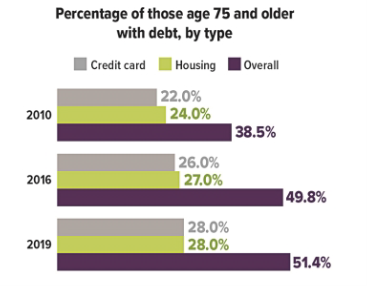 Medical debt is also a problem and often the result of an unexpected emergency. In the CRR study, 21% of baby boomers reported having medical debt, with a median balance of $1,200. Among those coping with a chronic illness, one in six said they carry debt due to the high cost of prescription medications.

Finally and perhaps most surprisingly, student loan obligations are the fastest-growing kind of debt held by older adults. Sadly, it appears that older folks are generally not borrowing to pursue their own academic or professional enrichment, but instead to help children and grandchildren pay for college.

Both the CRR and EBRI studies warn that increasing debt levels may be unsustainable for current and future retirees. For example, because the stress endured by those who carry high debt loads often results in negative health consequences, which then result in even more financial need, the effect can be a perpetual downward spiral. Another potential impact is that individuals may find themselves postponing retirement simply to stay current on their debt payments. Yet another is the risk that both workers and retirees may be forced to tap their retirement savings accounts earlier than anticipated to cope with a debt-related crisis.

If you are retired or nearing retirement, one step you can take is to evaluate your debt-to-income and debt-to-assets ratios, with the goal of reducing them over time. If you still have many years ahead of you until retirement, consider making debt reduction as high a priority as building your retirement nest egg. Talk with a Farm Bureau financial advisor about creating plans to help you prepare for and enjoy retirement.

Sources: Center for Retirement Research at Boston College, 2020;
Employee Benefit Research Institute, 2020
Prepared in part by Broadridge Investor Communication Solutions, Inc. Copyright 2021. These materials are provided for general information and educational purposes based upon publicly available information from sources believed to be reliable — we cannot assure the accuracy or completeness of these materials. The information in these materials may change at any time and without notice.

How can I help you?